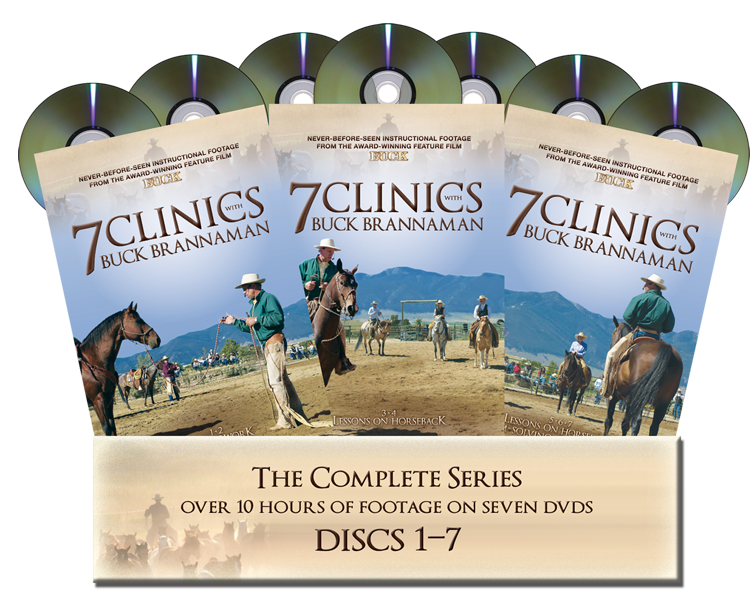 If you want to see over 10 hours making of the documentary BUCK, which stunningly portrayes the story of one man’s quest to help horses with “ people problems” , then you need to see this DVD. The documentary was lauded by critics and audiences. The 7 CLINICS with Buck Brannaman allows riders, trainers, and horse lovers everywhere to travel with Buck from coast to coast while learning his techniques and absorbing countless words of wisdom along the way.

Discs 1 & 2: Groundwork
In the first two parts you travel with Buck Brannaman through several clinics to learn important groundwork techniques, including: hooking on, leading, halter work, bridling, saddling, backing up, working in circles and half-circles, using the flag, and firming up.


Discs 3 & 4: Lessons on Horseback
With discs 3 and 4, follow Buck and learn some of his most important lessons when working under saddle, including: good riding form and position, finding the release and a soft feel, attaining collection, moving off the leg, riding serpentines, “getting the life up” (finding animation), perfecting the stop, and backing up.

Discs 5, 6 & 7: Lessons on Horseback, Problem-Solving, Words of Wisdom
In the last three parts, viewers learn more about lessons on horseback - such as turn-on-the-haunches, transitions, jumping, and finding the fee - as well as ways to solve problems, including crowding, biting, striking, fidgeting, rushing, anxiousness and sensitivity, and bad attitudes. The series ends with Buck’s best advice, tips, and ideas about working with, riding, and training horses, as he best tells it - forthright, honest, and with the integrity the world has come to expect of one of the finest horsemen of our time.

Buck Brannaman is known to most of the people as the role model and inspiration behind the novel and the feature film The Horse Whisperer. He travels extensively throughout the country and the world each year, teaching an approach to training and riding horses. His teachers were the renowned horsemen Tom Dorrance and Ray Hunt. This approach has inspired and revolutionized the equestrian world. His approaches and theories are now well-known also far in the mainstream since a documentary about him, ’BUCK’ was very successful in 2011.


Cindy Meehl met Buck Brannaman at one of his clinics in 2003. She founded Cedar Creek Productions, LLC, in 2008 in order to make the feature film BUCK, which has been hailed by audiences and critics around the world. Meehl lives in Connecticut with her husband, writer Brian Meehl, two daughters, four dogs, and two horses.